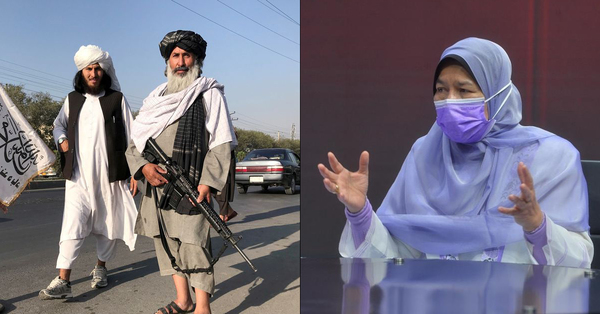 The Taliban, a militant Islamic group that ran Afghanistan in the late 1990s, has again taken control of the country this month as the American soldiers withdrew after a costly two-decade war.

The insurgents stormed across the country, capturing all major cities in a matter of days with Afghanistan’s President Ashraf Ghani fleeing the country, saying he had chosen to leave to avoid further bloodshed.

In light of the latest developments, Zuraida, who was Malaysia’s former minister of housing and local government in the previous Perikatan Nasional (PN) administration, has noted that the Taliban’s takeover of Afghanistan will undeniably lead to hostility towards progress and women’s rights there.

Describing the Taliban’s previous rule as “extreme and backward”, the Bersatu leader has called for international pressure to ensure that the group will not oppress women in Afghanistan.

Malaysiakini reported Zuraida saying that she has personally witnessed the Taliban’s extremism.

“I saw the condition of women and girls in the country. Women are generally treated as second-class citizens and their rights denied by the (Taliban) government,” she was quoted as saying.

“While we disagree with US imperialism, we are also worried about Afghanistan’s future, particularly for women who were previously oppressed by the Taliban.”

The Malaysian politician has therefore suggested that other Muslim countries should send missions to educate the Taliban on women’s empowerment and that she would be willing to visit Afghanistan.

How The Codette Project helps minority women upskill through tech

END_OF_DOCUMENT_TOKEN_TO_BE_REPLACED

Three women pretended to be kidnapped in order to trick their own father into paying a ransom but were later arrested after their ...

END_OF_DOCUMENT_TOKEN_TO_BE_REPLACED

In today’s world, women are more empowered than ever. But accidents still happen and crimes are still committed against wo...