Subscribe to our Telegram channel for our latest stories and breaking news.﻿

When Disney released Mulan in 1998, many people fell in love with Fa Mulan and her sacrifice for China

But did you know that Malaya also had our own 'Mulan'?

The authors of the book, Goodbye Nanyang, quoted Li’s daughters as saying their mother was born in Penang in 1918.

Her father, Li Rong Ji, was a businessman who was bold and upright while her mother, Liang Feng Chan, was kind and virtuous. They hail from the Taishan district in Guangzhou, China.

Li studied at a local Chinese school since she was a child and her academic performance was excellent.

Her patriotism was evident since she was in school. She and her classmates organised an anti-Japanese propaganda team during the start of the Sino-Japanese War, where they did charity performances, sold flowers on the streets, and boycotted Japanese goods.

They also organised women’s basketball games and handed over the donations to the fundraising society to oppose the Japanese. Li Yue Mei as a nurse.
Image via Chinatownology

So when the Chinese government appealed to the China Relief Fund for assistance in recruiting volunteers from Nanyang (now Southeast Asia), Li signed up immediately

But she was rejected because they did not recruit female mechanics. However, this did not hinder Li’s efforts to serve.

She recalled the historical story of ‘Mulan joining the army’ in ancient China. This inspired her to make the historical decision of disguising herself as a man to serve as a Nanyang Transport Volunteer in Yunnan, China during the Sino-Japanese War in 1939.

Since Li disguised herself as a man and slipped through the ranks to become a driver and mechanic, she became the only female driver to serve in the Nanyang Volunteer force, as women volunteers were enlisted to work only as nurses or carry out other non-driving tasks. Li Yue Mei (second row, sixth from left) in a group photograph with other Nanyang Chinese volunteer mechanics and drivers.
Image via National Archives of Singapore

Similar to Disney's Mulan, Li dressed up in her brother's clothing and changed her name to Li Dan Ying in order to complete her disguise

According to this blog post, Li managed to keep her identity a secret for over a year, throughout several life-threatening situations; that is, until she was involved in a car accident in 1940.

She was saved by fellow co-driver, Yang Wei Quan, who quickly rushed her to a hospital only to discover that Li Dan Ying was, in fact, a woman.

The news of Li’s actual identity and daring deeds reached home quickly, and many Malayan women expressed their admiration. She was even dubbed as the modern-day Mulan.

Unfortunately, that also led to her being discharged as a transport driver. She was, however, still allowed to continue serving the force as a nurse.

By this time, Li had fallen in love with Yang, just like Shang and Mulan. Six years later, in 1946, Li returned to Penang as a hero after the Japanese lost in World War II

She married Yang the same year and relocated to Yangon, Burma, where they ran a charming coffee shop and raised their tiny army of 10 children.

Goodbye Nanyang disclosed that during his visit to Burma, the Chinese Premier Zhou En Lai encouraged Li to send her children to study in China.

So, in 1965, Li left to Guangzhou, China with her children, despite Yang’s objection.

However, they were harassed upon arrival, as the country was in the early stages of its violent socio-political movement, the Cultural Revolution.

Paramilitary groups called the ‘Red Guards‘ were formed to harass and punish the elderly and other intellects as well as those who were deemed to have traditional views. 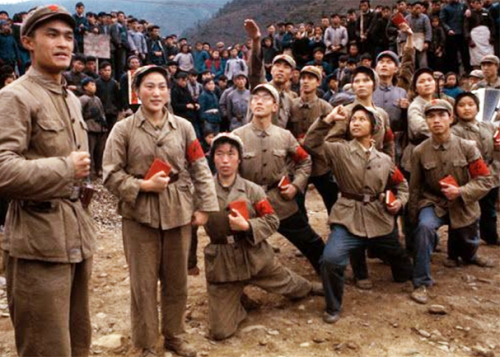 Because of this, Li's family was faced with allegations of having capitalist connections as she had served as a Nanyang Volunteer and her father was a businessman

Goodbye Nanyang also explains that Li was regarded as a supporter of Kuomintang (KMT), the Chinese Nationalist Party, due to her past as a Nanyang Volunteer.

As a result, Li and her family were exiled to the countryside, where she was regularly humiliated by the Red Guards, who insulted her in public and physically harassed her.

Unable to take the humiliation and abuse, Li died by suicide on the night of 28 August 1968.

To make matters worse, her children were not permitted to pay their respects or mourn for their mother, as the Red Guards forced them to disown their mother for being an enemy to the Cultural Revolution.

Li’s remains were tossed into a nylon mosquito net and left to rot in an unmarked grave for years until her children eventually brought her remains back to Burma in 1976.

A decade later, the Chinese government declared Li as a war hero and held a memorial in her memory on 23 October 1979

The government also accorded all the Nanyang Volunteers with the same status and gave them state pension and healthcare benefits, according to the authors of Goodbye Nanyang.

Not only that, the Yunan administration erected a monument on 7 July 1989, in memory of the Nanyang Volunteers who came from all the way from Malaya to help in the resistance against Japan.﻿

However, no monuments or awards can return Li her life — the injustice that happened to a selfless and courageous woman who was humiliated, abused, and driven to suicide by her own people whom she gave up everything to serve.

The deeds and sacrifices of this Penangite must not be forgotten. Tags:
21YearOld, Disguised, Fought, Man, Penangite, SinoJapanese, War
Newer “Can get free mosquito bites in M’sia” Netizens Amused By These RM80 Mosquito Stamps From Japan
Back to list
Older 10 Most Asked Interview Questions: How to Tackle Them

Man Tries to School KJ for “Typo”, Gets Schooled Back Instead

People who correct other people’s typos are jerks not because they are there to point out your flaws, but because they think there...

END_OF_DOCUMENT_TOKEN_TO_BE_REPLACED

His father had suffered a heart attack and the man was in a state of panic, which made him take drastic measures in the 11.30p...

END_OF_DOCUMENT_TOKEN_TO_BE_REPLACED

Last week, business magazine Forbes released its Singapore’s Richest 2021 list and Li Xiting took the top spot with a net worth of ...

END_OF_DOCUMENT_TOKEN_TO_BE_REPLACED

Video: The Iron Man Helmet Of Every Superfan’s Dreams

The Iron Man Autoking 1/1 MK5 helmet is not cheap – bordering thousands in retail value. As the helmet replicates the opening and ...

END_OF_DOCUMENT_TOKEN_TO_BE_REPLACED

“This Is It, I’m Gonna Die,” US Man Gets Spit Out After Nearly Being Swallowed By A Whale

A lobster diver from Cape Cod, Massachusetts, had the shock of his life last week after he was nearly swallowed up and then spit ou...