Disclaimer: This piece reflects the writer’s opinion and compiled opinions of others on the subject matter. It does not reflect the opinions or beliefs of WORLD OF BUZZ.

The Covid-19 pandemic has infected every continent, caused millions of deaths, destabilised the economy, and shut down integral institutions such as education, tourism, healthcare, and many more. However, as a piece of silver lining, the pandemic has also led to an increase in the interest and participation of young people in politics as well as major issues such as human rights and the environment.

There have been many instances of young people stepping up via protests, aiding in issues pertaining to refugees and much more.

Following the recent resignation of former Prime Minister, Tan Sri Muhyiddin Yassin who is 74-years-old, it is imperative for Malaysia to look towards younger leaders to take charge of the helm. 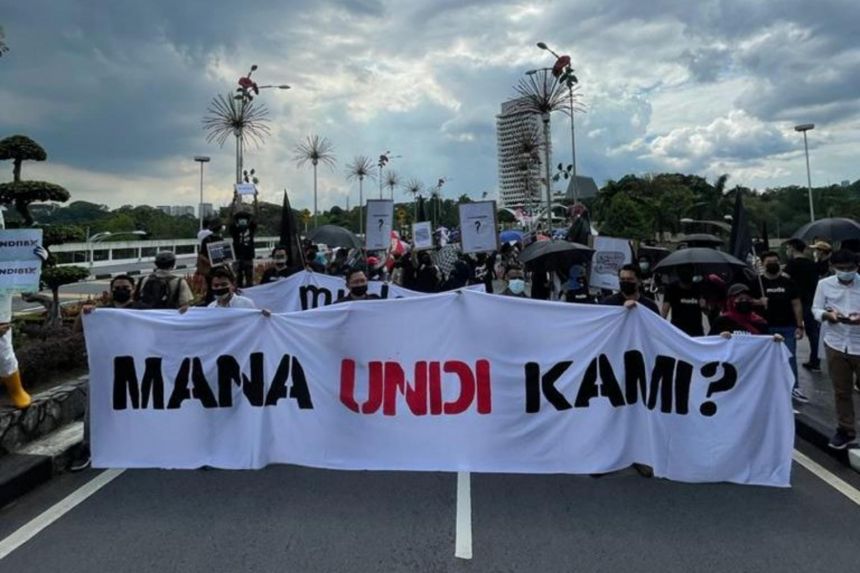 The younger generation is tired of the constant politicking and power struggles and is gravitating towards successful young leaders (to whom they can actually relate), who bring a fresh perspective in facing problems that previously seemed unsolvable.

As a point of reference, the global average age of a member of parliament worldwide is 53, whilst in Malaysia, it stands at 55.5. After all, Malaysia holds the Guinness World Record for Oldest Prime Minister in the World. Although the Inter-Parliamentary Union 2021 report on Youth Participation in National Parliaments showed that only 2.6 per cent of the world’s parliamentarians are under age 30 which is a small increase of 0.4 per cent since 2018, Malaysia is behind.

The report stated that Europe and the Americas, have higher shares of young MPs under all three age thresholds (ages 30, 40 and 45) than any other region.

This can be seen through Finland’s appointment of Sanna Marin as Prime Minister in 2019 when she was only 34-years-old and Austria’s appointment of 33-year-old Chancellor Sebastian Kurz in 2020. 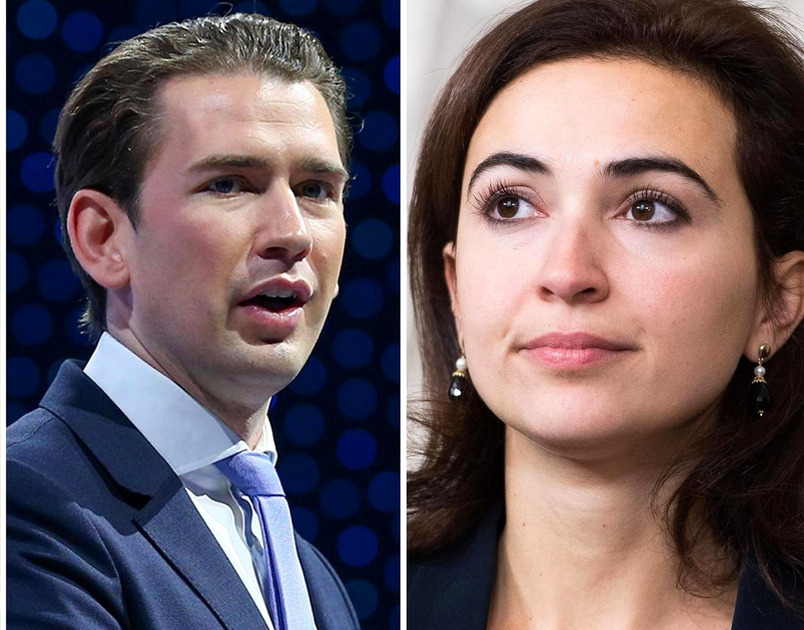 The problems with having older leaders

The issues that arise with having old leaders are plentiful. One of the main issues is that older leaders are often less open to change as they are more set in their ways.

They are often unwilling to let go of how things were done many years ago and do not want to innovate and try fresh new ideas as the word ‘change’ is treated as a dirty word.

Another major issue is their inability to be flexible and adapt to new situations and environments.

Gautam Mukunda who is an assistant professor at Harvard Business School said in an opinion piece, “Given the potential dangers, the burden of proof should be on ageing leaders to justify their continued hold on power, not on those who challenge them.”

He also said that “Aging can have a powerful and largely negative impact on leaders in three ways. It can greatly increase their vulnerability to illness, shift their personality and decrease their cognitive abilities.”

This problem is obviously not specific to Malaysia as a Twitter user from abroad said a topic that is not touched upon enough is, “How 70-80 year old is generally regarded as unemployable due to mental decline/skill mismatch – yet they’re exclusively running the country.” 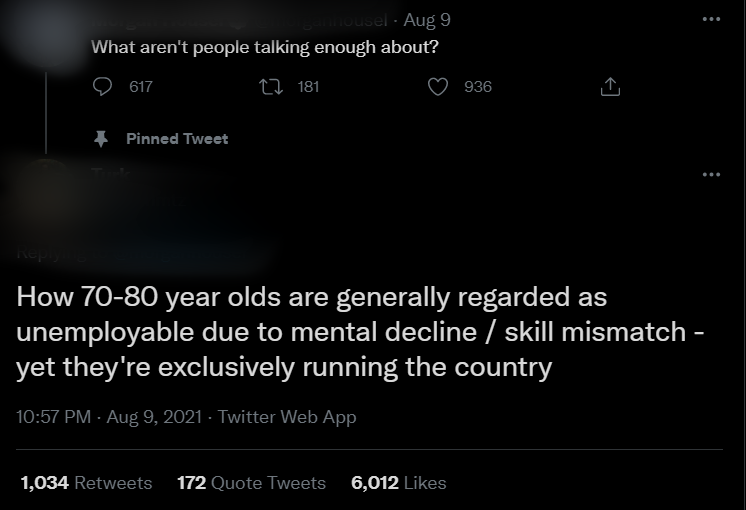 One Twitter user said that “Malaysia seems to be stuck in 1998, and the political & economic upheaval of the Asian financial crisis. Unlike neighbouring Indonesia & Philippines, politics in Malaysia seems unable to throw up newcomers or mould-breakers.”

The user-added, “It’s hardly a victory for youth as Muhyiddin is 73.”

Another user pointed out that, the thing that is the most saddening is that the ones who are fighting to be Prime Minister are all over the age of 70.

“Does our country not have any reliable young people,” he asked.

The push for younger leaders

The previous appointment of Syed Saddiq as the youth and sports Minister back in 2018 when he was at the age of 25 was a glimmer of hope for the youths of Malaysia as he was the first-ever example that the younger generation was being heard.

With his appointment as an MP, he managed to push forward several groundbreaking policies such as UNDI18. However, the treatment he received from other MPs whenever he tried to speak in parliament is a testament to the attitude of older politicians towards their much younger counterparts.

Let us all push the need for young people in power. At the end of the day, it is our generation that has to survive and live in the world that the elder generation has left for us. Let’s allow for innovations and a set of fresh new ideas to tackle the challenges of today’s world.

Also read: This M’sian Is In The 30 Under 30 Changemakers Awards For Teaching Youths To Save Oceans 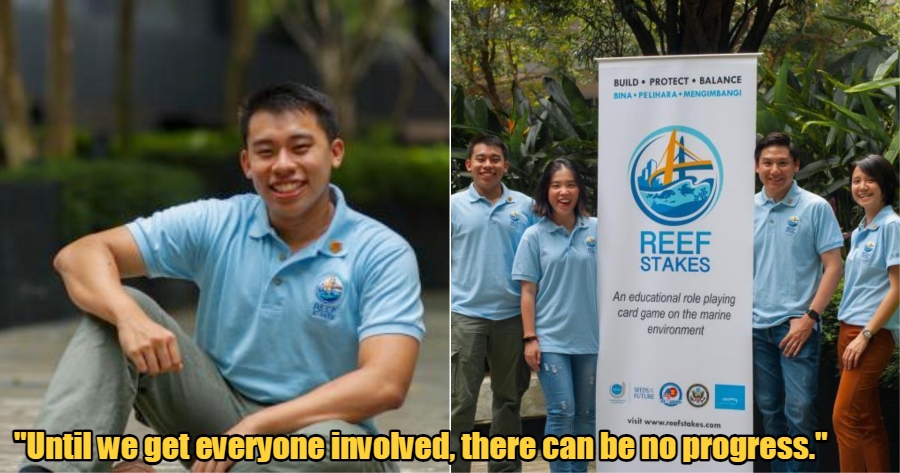 END_OF_DOCUMENT_TOKEN_TO_BE_REPLACED

You don’t need me to tell you that cost of living in Malaysia, including housing cost, is high. It is extremely hard for someone ...

END_OF_DOCUMENT_TOKEN_TO_BE_REPLACED

Throughout the MCO, property viewings have pivoted online. Some property developers, agencies, or renters would offer either video ...

END_OF_DOCUMENT_TOKEN_TO_BE_REPLACED

6 Types of Passive Income in Malaysia

There are many types of passive income in Malaysia. This guide will help you to navigate most, if not all available options and h...

END_OF_DOCUMENT_TOKEN_TO_BE_REPLACED

“I respect those who work for couriers and accept Cash on Delivery (COD). Their mental strength is amazing because they often get ...

END_OF_DOCUMENT_TOKEN_TO_BE_REPLACED

Singapore’s overall unemployment rate crept higher to 2.8 per cent in July, rising 0.1 percentage points from the previous month. I...

END_OF_DOCUMENT_TOKEN_TO_BE_REPLACED

BMW Group Malaysia recently revealed the BMW iX xDrive40 which is also available in an xDrive40 Sport model as well. This new fully...

END_OF_DOCUMENT_TOKEN_TO_BE_REPLACED

My Experience with Doing Vending Machine Business in Malaysia

This article records my own personal experience in doing vending machine business in Malaysia, as a way to earn extra income. If ...

END_OF_DOCUMENT_TOKEN_TO_BE_REPLACED

I’ve been paying zakat diligently and imperfectly for years, learning along the way. It’s time for me to compile what I know in a...

END_OF_DOCUMENT_TOKEN_TO_BE_REPLACED

As of March 2021, Singapore’s Temasek Holdings reported a 25 per cent rise in its portfolio value to a record US$282 billion amid t...

END_OF_DOCUMENT_TOKEN_TO_BE_REPLACED

If you haven’t heard yet, Amazfit is releasing their new PowerBuds Pro—which has active noise cancellation (ANC) features and can a...